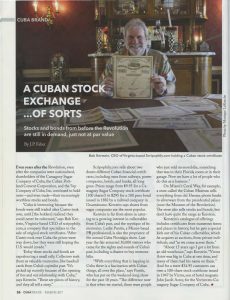 Even years after the Revolution, even after the companies were nationalized, shareholders of the Camaguey Sugar
Company of Cuba, the Cuban Portland Cement Corporation, and the 7up Company of Cuba, Inc. continued to hold
onto–and even trade-their increasingly worthless stocks and bonds. “Cuba is interesting because the bonds were still traded after Castro took over, until [the holders] realized they could never be redeemed,” says Bob Kerstein, Virginia-based CEO of scripophily. com, a company that specializes in the sale of original stock certificates. “After Castro took over Cuba the prices were way down, but they were still hoping the U.S. would invade.” Today those stocks and bonds are experiencing a small rally. Collectors seek them as valuable mementos, like baseball cards from Cuba’s capitalist past. “It’s picked up recently because of the opening of ties and our relationship with Cuba,” says Kerstein. “These are pieces of history, and they all tell a story.”

Scripophily.com sells about two dozen different Cuban financial certificates, including ones from railways, power companies, hotels, and banks, all long gone. Prices range from $9.95 for a Camaguey Sugar Company stock certificate (100 shares!) to $295 for a 100 peso bond issued in 1882 by a railroad company in Guantanamo. Kerstein says shares from sugar companies are the most popular. Kerstein is far from alone in catering to a growing interest in collectibles from Cuba’s past, and the mystique of its memories.

Leslie Pantin, a Miami-based PR professional, is also the proprietor of the annual Cuba Nostalgia show. Last year the fair attracted 30,000 visitors who came for the sights and sounds of Cuba’s past, including a chance to buy memorabilia. “With everything that is happening in Cuba there is a fascination with Cuban things, all over the place,” says Pantin, who has put on the weekend-long show for the past 18 years. “The difference now is that when we started, there were people who just sold memorabilia, something that was in their Florida room or in their garage. Now we have a lot of people who
do this as a business.”

On Miami’s Coral Way, for example, a store called the Cuban Museum sells everything from old Havana phone books to silverware from the presidential palace (now the Museum of the Revolution). The store also sells stocks and bonds, but don’t have quite the range as Kerstein. Kerstein’s catalogue of offerings includes certificates from numerous times
and places in history, but he gets a special kick out of his Cuban collectibles, which he acquires at auctions, from private individuals, and “as we come across them.” “About 15 years ago I got a lot from an old warehouse,” says Kerstein. “Victor
Astor was big in Cuba at one time, and many of them had his name on them.” And for a mere $34.95 customers can own a 100-share stock certificate issued in 1947 by Victor, son of hotel magnate John Jacob Astor, for the Vertientes-Camaguey
Sugar Company of Cuba.